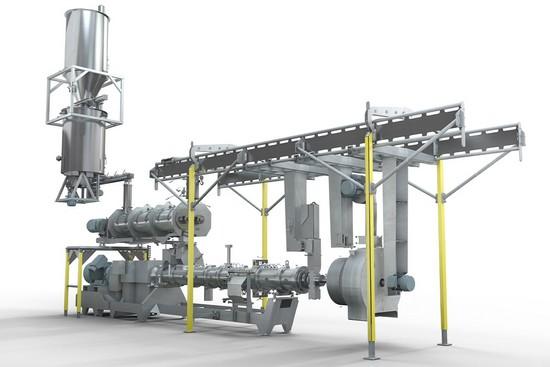 Traditional twin-screw extrusion design has served its purpose as the pet food and aqua feed industries developed. Yet both industries now stand at a tipping point where new trends are pushing the traditional systems beyond their limit. Flexibility is key and what the new generation Wenger twin screw extrusion systems are built on.

The Thermal Twin® extrusion system is tailored for pet food manufacturers, so they can develop a wider range of products using an extensive choice of ingredients while preserving ingredient and product identity.

The Aquaflex® extrusion system is tailored for aquatic feed manufacturers to maximise their investment by giving them the capability to manufacture a wide range of products such as floating, sinking, shrimp, and micro feeds in different product sizes while utilising a broad ingredient selection.

This flexibility is possible given these systems are engineered with a specialised screw profile design to deliver higher volumetric capacity and the capability to operate using a wide range of thermal and mechanical energy cooking conditions.

An extrusion system with the ability to vary this energy utilisation ratio and shift to the most favorable energy sources from a cost standpoint, brings increased flexibility to the cost of operating the system. Wenger extruders are engineered to operate in thermal to mechanical energy ratios from 1:1 to as much as 14:1.

This is achieved with a twin-screw profile that allows up to four-to-six times more steam injection into the extruder barrel. Additionally, these systems are coupled with a high intensity preconditioner (HIP) which provides less product moisture variation and increases the starch gelatinisation compared to other steam conditioning designs (See Table 2).

As a result of a wider energy utilisation ratio and a specialised twin screw profile, coupled with a preconditioner which delivers less product moisture variation and increased cook, the flexibility of the Thermal Twin® and Aquaflex® extrusion systems become key to increase product offerings.

Thermal energy is considered a more natural way of cooking when compared to mechanical energy. This translates to less shear and more gentle kneading to continuously develop the visco-elastic dough product matrix.

New generation twin screw extruder design and thermal cooking allow for a wider ingredient utilisation such as novel animal and vegetable protein sources. Not only is there a wider ingredient selection to work with, inclusion levels of ingredients such as fresh meat and slurries are two-fold in new generation Wenger twin screws extruders when compared to single screw and traditional twin-screw extrusion systems. 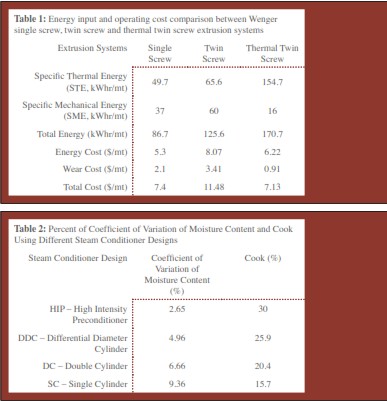 Nutritional studies in Brazil, Europe, and the United States indicate that there is less protein degradation and lower fat rancidity levels when thermal energy is emphasised over mechanical energy during the extrusion process. Protein digestibility of up to 95 percent was observed for product generated on a Thermal Twin® extrusion system using fresh meat compared to 80-85 percent protein digestibility of a product using rendered meat meals. Additionally, significant higher retention rate of important ingredients when thermal energy inputs are emphasised (See Table 3).

In two separate case studies in India and Vietnam using a new generation twin screw Aquaflex® extrusion system, a 10 percent formula cost reduction was observed producing shrimp feed and tilapia feed without compromising product integrity. Pellet durability indices above 99 percent were recorded in both studies, where product size ranged from 0.6 mm up to 2.2 mm in shrimp feed and 1.8 mm up to 7.0 mm in tilapia feed. Additionally, an average equipment wear cost of US$1.05/mton was achieved using the new generation twin screw. Significantly lower compared to a single screw (US $2.10/mton) and traditional twin-screw extrusion system (US$3.41/mton).

Overall, the new generation twin screw extrusion systems simply outperform the single screw and traditional twin-screw systems. The flexibility that has been engineered into these extrusion systems supplies pet food and aqua feed manufacturers the precise tool to maximise their investment and optimise cost of operation. Moreover, it can help achieve premiumisation and clean label products by allowing a wider range and higher inclusion level of fresh ingredient utilisation. 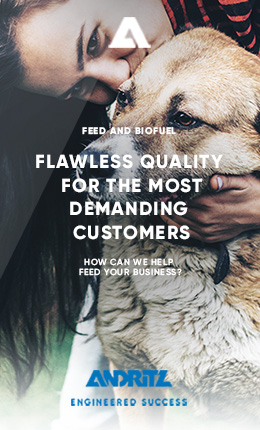