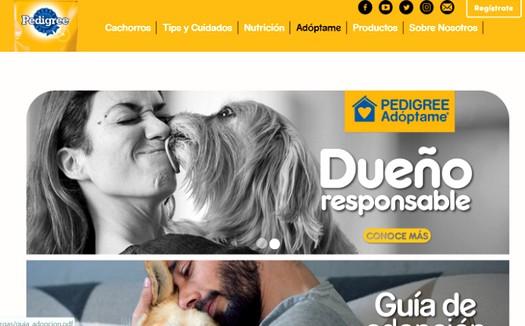 A Pedigree adoption problem seeks to help reduce the number of homeless pets in Argentina, Mexico and Brazil.

In Latin America, pet abandonment is a public problem that increases over time. Moreover, it worsens in countries with economic setbacks like Venezuela, or in those where economic uncertainty prevails.

The number of abandoned pets is unknown, as there is no official information on the number of dogs and cats roaming the streets of Latin American countries. However, the number is likely high. Although pet owners in the region are becoming more responsible, when the economic situation tightens, unfortunately pet abandonment rises.

Pedigree, a leading Mars brand, introduced a program called Adóptame in Argentina, Mexico and Brazil, aiming to contribute to reducing the number of homeless pets in the region.

In Mexico, the Adóptame program dates from 2008 and currently supports 13 shelters for abandoned pets and three nonprofit organizations focusing on rescuing and finding a new home for thousands of pets.

Among the main accomplishments of the Pedigree initiative in Mexico are the aid to more than 39,000 dogs and 11,000 cats finding new homes. In addition, 400,000 animals were spayed to prevent a substantial number of births of dogs and cats onto the streets, and the program is training 30 dogs for rescue work during natural disasters. Mars monitors the facilities frequently, as it is accountable for keeping high-quality standards for the shelters.

Another positive characteristic of the program is the ongoing donation of pet food; more than 4,500 Pedigree pet food products have been delivered to shelters. Usually, pet shelters face financial difficulties due to the cost of feeding and the limited resources they have. According to a Pedigree press statement, nearly 70% of the costs of a pet shelter is feeding. With Mars offering pet food to the shelters, the facilities can work indefinitely.

Why is this initiative important?

Nowadays, a key trend in Latin America is pet adoption. Numerous organizations encourage pet lovers to adopt a pet instead of buying one.

As one of the leading pet food brands of Latin America, Pedigree is aware that market leadership also conveys social responsibility. In this regard, Pedigree was a pioneer in supporting pet rescue in the region; hopefully, more companies will decide to adopt similar initiatives shortly.

by IVÁN FRANCO - Iván Franco is the founder of Triplethree International and has collaborated on hundreds of research projects for several consumer goods industries. He was granted the Global Consultant of the Year award by Euromonitor International and authored the book 17 Market Strategies for Growth (in Spanish).