There is an increase in global concern in finding solutions to feed a constantly growing population. One of the proposals for this problem is the use of alternative proteins, both for human consumption and for animal feed, which includes pets, since the population of dogs and cats and their food segment is also in constant growth. 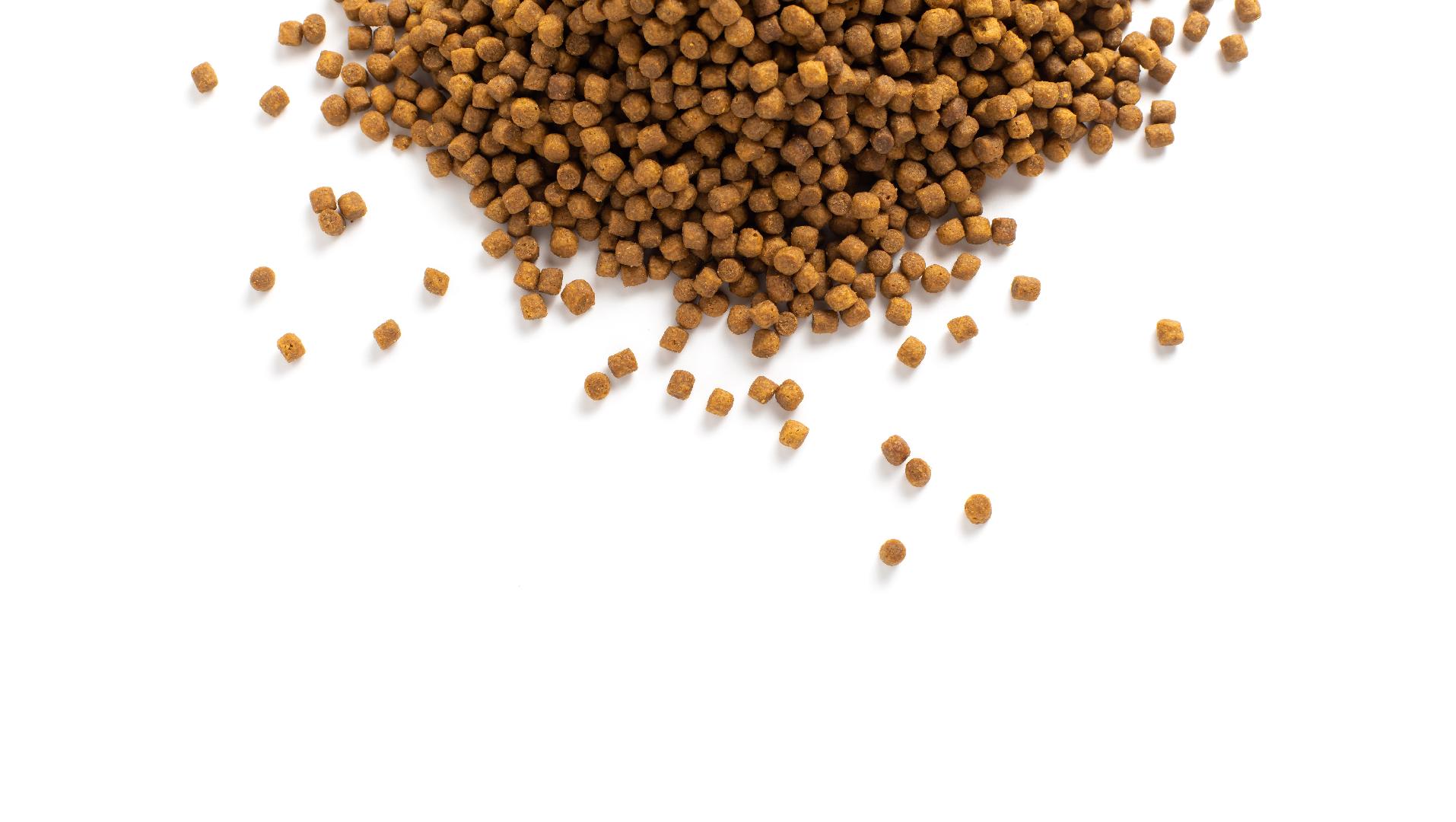 According to the United Nations Organization (ONU), the world population will reach almost 9.6 billion in 2050 (ONU, 2019). The food needed for this population, with an ever-increasing lifestyle and meat consumption, will be 48.6% more than current production. To meet this demand, an intensification of food and animal production has been promoted, which must be done in a sustainable way to guarantee a healthy planet for a constantly growing global population (FAO, 2017; Liua et al., 2022).

In this context, the "Sustainable Development Goals" (SDGs) were developed, which is an interrelated strategy for the promotion of sustainable development practices and solutions, to which it is expected that, in 2030, every developed country and its industries will be aligned to (ONU, 2015).

The growth in population and pet ownership contributes to the expansion and greater representativeness of the pet food segment in the global market. In relation to its trends and the important role that the sector plays in world production, the industry must also contribute to SDGs achievement in the direction of sustainability in the coming years.

In relation to pets, the term "sustainability" can be defined as the conscious management of resources and waste necessary to meet physiological needs without compromising the ability of future generations to meet their own environmental, social, and economic needs ( Acuff et al., 2021).

In the pet food industry, it is common to work with a wide variety of raw materials. However, current debates are focused on protein sources, the macronutrient with the highest ecological cost (Berardy et al., 2019), and is an essential compound in diets for carnivorous species such as dogs and cats. It is also one of the criteria for the choice of balanced feed by their owners (Laflamme et al., 2008).

In general, pet food formulations are known for their excess protein, with a great diversity of products in the segment and varieties of products on the market, such as those free of grains and natural foods (Beaton, 2014; Wall, 2018) that promote direct competition with some ingredients of human food (Swanson et al., 2013; Okin, 2017). On the other hand, dog and cat foods are positively associated with the rendering process, which promotes environmental benefits by transforming by-products from slaughtered animals into nutritionally useful ingredients such as animal-derived meals (HOA) (Meeker; Meisinger, 2015; Wilkinson; Meeker, 2021).

Despite the conventional use of HOA in animal feed with its respective environmental benefits, other protein sources are also used in feed formulation, such as soybean meal and corn gluten. Research and development of different types of alternative proteins are interesting, as they have nutritional and sustainability potential independent of conventional animal production, contributing to less competition with foods intended for human consumption. In addition, debates must be generated about the need to use increasingly lower amounts that meet their requirements.

In this context, similarly to what happens in human food research (Karmaus and Jones, 2021), the main emerging proteins of interest for pet food have been those obtained or derived from unicellular microorganisms and insects.

Microalgae are a big bet as a sustainable food source due to their ability to convert sunlight and inorganic and organic carbon sources into biomass of high nutritional and functional quality (Nicolai et al., 2019). In turn, some species are rich sources of protein and essential amino acids with antioxidant effects and are also sources of lipids such as polyunsaturated fatty acids.

In general, the term crude protein, within the diverse group that makes up the microalgae, the species can be highlighted: Spirulina platensis and Chlorella Vulgaris that have between 60 - 71% and 51 - 58%, respectively of this nutrient (Souza et al., 2019). However, the ideal nutritional composition of algae depends on its cultivation, processing, and environmental factors, such as pH, light intensity, nutrients, CO2 supply, and temperature.

Compared with other protein foods, microalgae are presented as competent organisms to synthesize essential amino acids such as: leucine, isoleucine, methionine, lysine, threonine, valine, or histidine (Guil-Guerrero et al., 2004). They also may present similar or even higher values in terms of lysine and methionine when compared to: legumes, corn, and soy-based products (Spínola., 2021). However, small deficiencies can be observed among sulfur amino acids such as methionine and cysteine, characteristic of plant proteins (Becker, 2004).

Despite having balanced food for dogs and cats on the market, including microalgae, mainly Spirulina platensis and Chlorella SPS with levels of up to 0.4% (Beynen, 2019), there is still little research evaluating the digestibility and palatability of these elements in pet food. In addition to this, and beyond the fact that the use of microalgae in the pet food industry is gaining importance due to the high nutritional values and the increase in production, obtaining the total biomass is still not enough to meet the enormous industry needs, contributing to its inclusion only in premium- and super-premium-rated pet foods.

Within the products of microbial origin, yeasts are by-products of the brewing industry (Butolo, 1991), which are currently being applied in large numbers in fermentation processes (Bourgeois and Larpent, 1995). In pet diets, yeast use has been incorporated due to its high protein and low lipid content, showing beneficial effects on the health of the dog microbiota (Lin et al., 2019). However, little research has been done related to them as a protein source in dog and cat food.

In the pet food industry, yeasts already work as a functional ingredient at a low inclusion rate, which can be justified because high inclusion levels are associated with soft and malformed fecal matter, with a level recommendation of up to 15%. This is due to the limited availability and high price in the market, such as that of brewer's yeast (Martins et al., 2013).

In a study (Martins et al., 2013), when comparing the inclusion in diets with 15% of different types of yeast: brewer's yeast, whole sugar yeast, and self-lysed yeast (spray-drying process), it was observed that Brewer's yeast had more protein and tended to be more digestible than the two cane yeasts. However, the digestibilities of all three yeasts were adequate for use in dog diets. A recent study concluded that dry cane yeast can be included in canine diets with safe levels close to 30% (Reilly et al., 2021).

Despite the potential for sustainability and the advantages in relation to other microorganisms, mainly due to its ability to assimilate a wide variety of substrates, its high growth rate, and ease of separation of its biomass (ICIDCA, 1999), the use of Yeasts as a source of protein in diets for pets is little known, and further studies are necessary.

Regarding the use of insects in animal feed as an alternative protein source to those already existing, this can be justified by its nutritional value and environmental benefit. Edible insects constitute a good protein source whose concentration can vary between 40-70% in dry matter, depending on the species (Lisenko, 2017; Sosa and Fogliano, 2017). They also have a good level of essential amino acids (Oliveira et al., 2017). In addition to this, insects are a great lipid source, which can vary from 10 to 50% in dry matter, with a large amount of linoleic acid (18:2 n-6) and alpha-linolenic acid (18:3 n-3) when compared to other sources (Lucas et al., 2020). In addition, it has adequate levels of vitamins (riboflavin, pantothenic acid, biotin, folic acid) and minerals (calcium, iron, and zinc) (Govorushko, 2019).

It is estimated that up to 50% of the insect industry is dedicated to the pet food segment (Huis, 2022). The investigations have been based mainly on the larvae of the black soldier fly (Hermetia illucens), tenebrio Molitor (Tenebrio Molitor), and cricket (Gryllodes sigillatus), being processed in the form of flour. Measured as fecal nitrogen, in dogs and cats consuming defatted, dried, and ground extruded diets of black soldier larvae (BSF), with an average inclusion level of 2%, digestibility ranged from 73.4 – 87.2% (Bosch and Swanson, 2021; Paßlack and Zentek, 2018; Yamka et al., 2019). In in vitro digestibility tests in dogs, results reached a coefficient of 89.7% (Bosch et al., 2014).

Studies with tenebrio flour had apparent digestibility values of 83.6% for dogs and 80.4% for cats by the conventional method and varied between 91.3 – 92.5% in vitro digestion for dogs (Bosch et al., 2014; Bosch et al., 2016). With the inclusion of 8-24% cooked, ground crickets in extruded dry dog foods, digestibility ranged from 82.1-86.0% (Kilburn et al., 2020). Regarding the availability of essential amino acids, BSF can be limited to methionine for cats and threonine for dogs (Bosch and Swanson, 2021).

Fecal quality was also investigated, with an inclusion of 24% cricket meal, and no inconsistencies were observed (Kilburn et al., 2020), also being verified with BSF at a 30% inclusion in dry extruded feeds (Meyer et al., 2019). Some studies (Kilburn et al., 2020; Paßlack and Zentek, 2018; Yamka et al., 2019) show that, in terms of palatability in dogs and cats, there are different preferences according to the insect species and their level of inclusion in diets. But, in general, dogs seem to accept food containing up to 10% BSFL meal and 24% crickets, while for cats it is 5% BSF.

The nutritional composition of insects may allow the total substitution of some sources of plant origin, such as soybeans, used in balanced feed. Bosch et al. (2014) verified that the crude protein content of insect substrates was higher when compared to soybean cake protein and was similar to that of poultry and fish meal.

In addition, insect-based diets are considered hypoallergenic and are emerging as an option for guardians of cats and dogs suffering from food sensitivities (Bosch and Swanson, 2020). Other interesting aspects of the use of insects for feeding dogs and cats are their effectiveness in feed conversion, low greenhouse gas emissions, and low water and land use needs when compared to other species (Van Huis and Oonincx, 2017). Thus, they are not necessarily in competition with food for humans (Liu, 2020; Huis, 2020), and their management tends to be more sustainable than in other conventional animals such as cattle, pig, and poultry production (Bosch and Swanson, 2020; Liu, 2020).

To have a more efficient and more widespread pet food production, more studies are necessary for a better understanding of aspects such as: undigested fractions of insects (chitin), present in the cuticle of these species, its prebiotic potential, and the impact on pet health (Bosch and Swanson, 2020). In addition, better legislation would have to be developed, the amounts of inclusion determined, and research into aspects related to the preference, acceptance, and trust of dog and cat guardians for these alternatives because they are also part of this challenge.