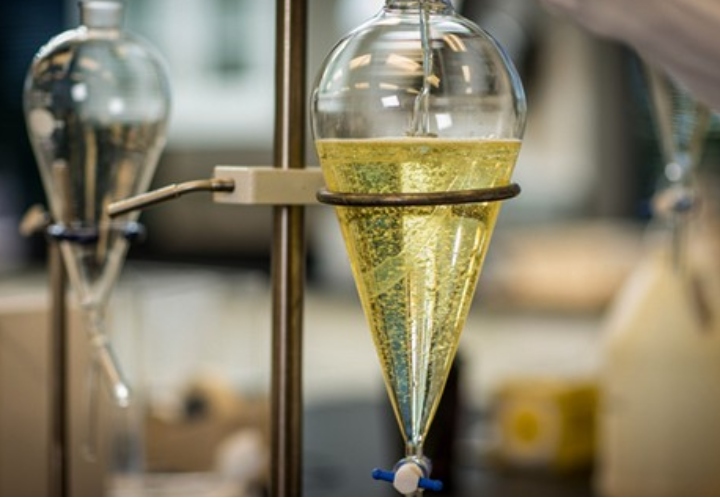 Fat plays an important role in dog and cat food, providing nutritional, functional and palatability benefits. The type and amount of fat used varies by the diet, the finished product specifications and the manufacturer. There has been limited research evaluating the correlation between palatability and topical fat sources and their applied amounts, leaving many pet food manufacturers questioning the potential impact various combinations may have on dog and cat preference.

To evaluate, AFB International conducted research at the company's Palatability Assessment Resource Center (PARC) facility on the effect both external fat sources and levels have on palatability preference in dogs and cats. The research found differences in fat sources and levels preferred by dogs and cats, demonstrating that diets can be tailored based on animal preferences.

The study design consisted of 5 sources of fat (canola oil, chicken fat, beef tallow, bacon fat, and herring oil) applied topically at two levels (3% and 9%). The different sources of fat represented a variety of flavors and aromas, while the two application levels simulated the low and high levels applied in a topical coating. To control variability, the same kibble, equipment, measurements and palatants were used on both rations in each species. All combinations were topically coated on an economy grain-based dog and cat kibble along with a non-meat palatant. The fat and palatant were applied sequentially on the kibble. Each fat source and application level combination was tested versus each other in a round robin process and the data analyzed in a Bradley-Terry model.

This took the data from each pairing and formed a ranking of the fats from most preferred to least. Feeding trials were conducted with mixed breed animal panels at PARC. Paired preference feeding trials were conducted with two exposures (20 animal x 2 days) and bowl placement was alternated each day. Data was collected on grams consumed and the firstchoice bowl for both animal species.

Dogs and cats have different preferences when it comes to the source and concentration of fat source. 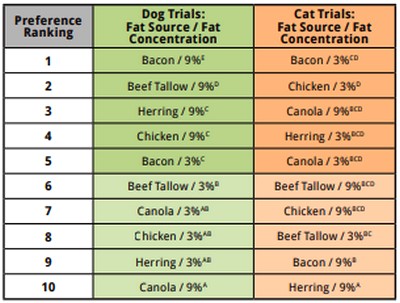 For dogs, the results showed a greater overall response to higher fat concentrations / percentage levels (9% vs. 3%). The results also demonstrated a preference for fat sources with more flavor and aroma. Additionally, there was a significant difference in palatability between the two highest-ranked variables compared to all others.

Cat trial results were very different compared to the dog trial results. For cats, there was less preference differentiation between the top ranked fat sources and concentrations vs. the bottom ranked, which statistically did not provide a stand-alone favorite as in the dog trials. Cats, overall, preferred the lower fat concentration level (3%). Fat sources with more flavor, such as bacon, also ranked well.

The research showed differences in kibble fat sources and concentration preferences in dogs and cats. For dogs, a nine percent fat concentration on a kibble will be generally preferred over the lower application of three percent. Bacon and beef tallow fat sources were the most preferred by dogs in the trials.

For cats, a three percent fat concentration will generally perform better than the nine percent for majority of the fat sources.