During the last few years, we have observed the demand for an increased level of automation in various sectors of the global industry. This need came especially by managers and business owners to improve their plants to reduce costs and labor taxes in the first place. 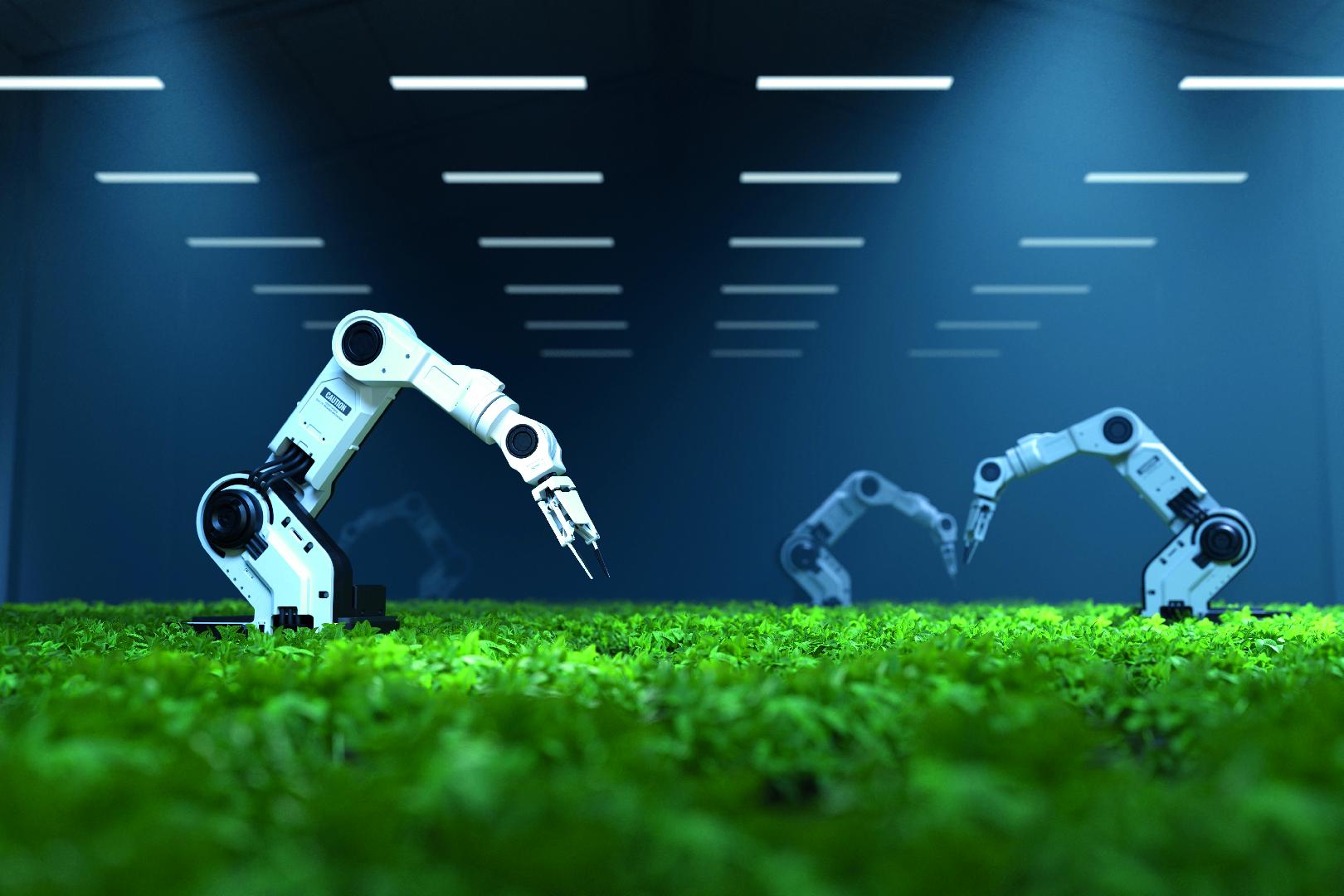 Secondly, an increased level of automation is needed to guarantee stipulated quality standards; and facilitate processes control and data accessibility by industrial managers.

This phenomenon of an increased level of automation, real-time process control, and digitization of information is globally known as the "Industry 4.0 ". However, we can´t avoid asking ourselves how this phenomenon applies to animal feed production. What resources do we already have available today? And what advantages can these automation features bring to the productivity and efficiency of industries?

Next, we try to describe, in a summarized way, what technologies are currently available for each production process of a feed manufacturing industry.

It is possible to establish "entry routes" for each raw material received: since the moment the automation software gets the information about what raw material is being received, it can automatically determine the "path" which that raw material must take to arrive at its destination. That is to say, to establish through which equipment the product will pass until it is properly stored. In addition, the reception and dosage silos usually have minimum and maximum level sensors or load cells, so it is possible to know exactly how much merchandise is in each silo, or at least if the said silo is full or empty.

This technology is essential to avoid, for example, cross-contamination in the reception process, that is, to prevent the soybean meal that the factory is receiving from going to a silo that already has a different raw material, such as organ meal.

Dosage of macro and micro-components

Through dosing automation software, it is possible to know exactly how much of each raw material was used in a given production batch and the variation for the quantities previously stipulated. That is to say, we can know how much, more or less, of each product was dosed in each batch. In addition, it is possible to know how much of each product was used in a day, month, or year, which permits automatic inventory controls.

Another available resource is the register of the formulas produced. This way, when there is a need to make a product already registered, it is only possible to select the existing one, which must contain all the information in terms of raw materials used, quantities, and location.

In addition, it is possible to issue alerts if, for example, there is not enough stock of a specific raw material to comply with the provisions of the registered formulation.

Generally, above the mill, we have a feeding system, which can be done through a dosing thread or, more commonly, a rotary valve.

The automation software can increase or decrease the rotation of this feeder valve according to the amperage main mill motor. That is to say, if the equipment is working very close to the maximum amperage of the motor, the automation will make the rotation of the valve automatically decrease, consequently reducing the volume of raw material entering the mill per period. On the contrary, automation will increase the product flow entering the mill if the main motor is working with excessively low amperage.

In addition, it is possible to install sensors in the mill to measure temperature and vibration, for example, and parameterize the software so that it turns off the equipment if the maximum allowed vibration limit hits. 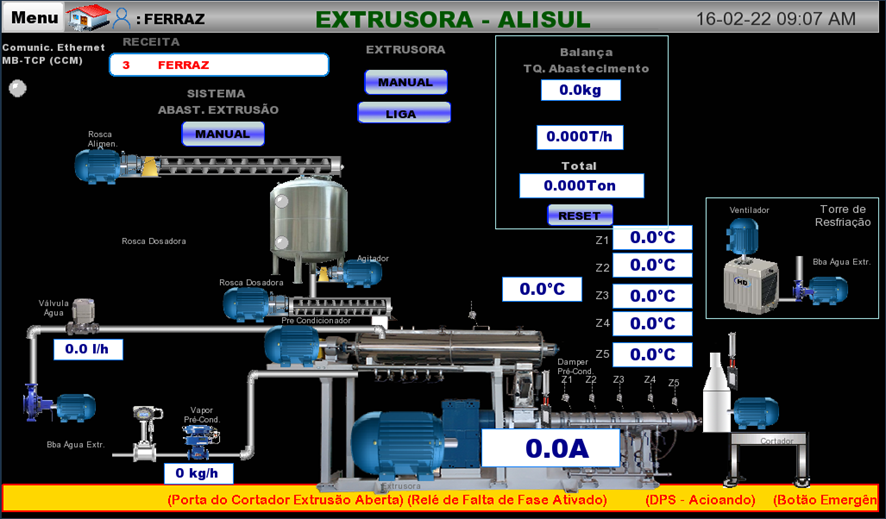 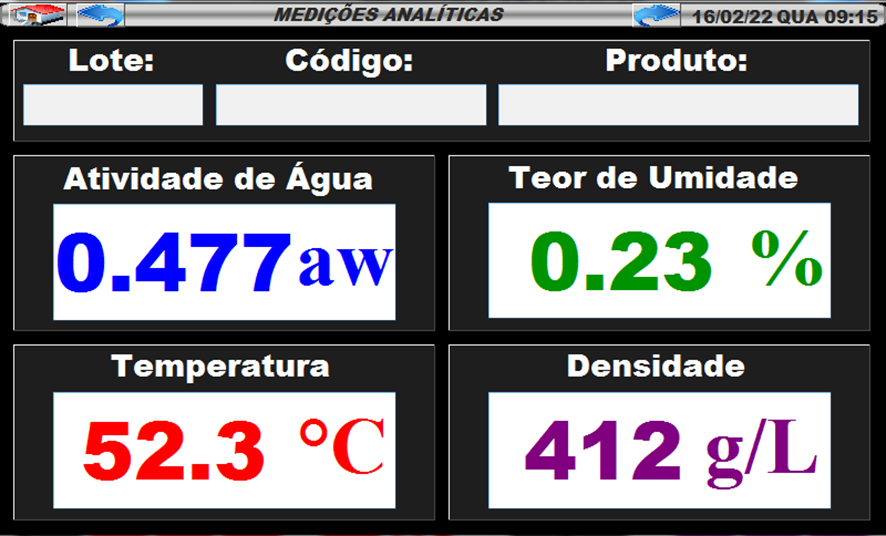 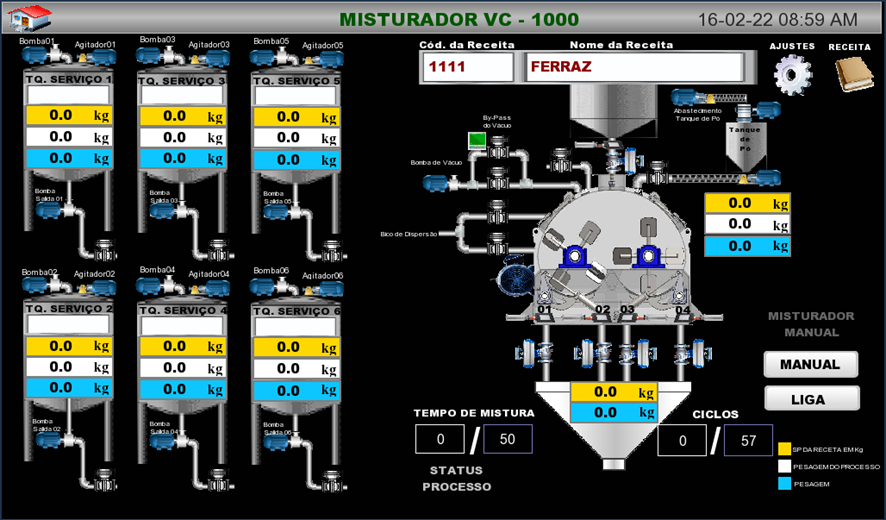 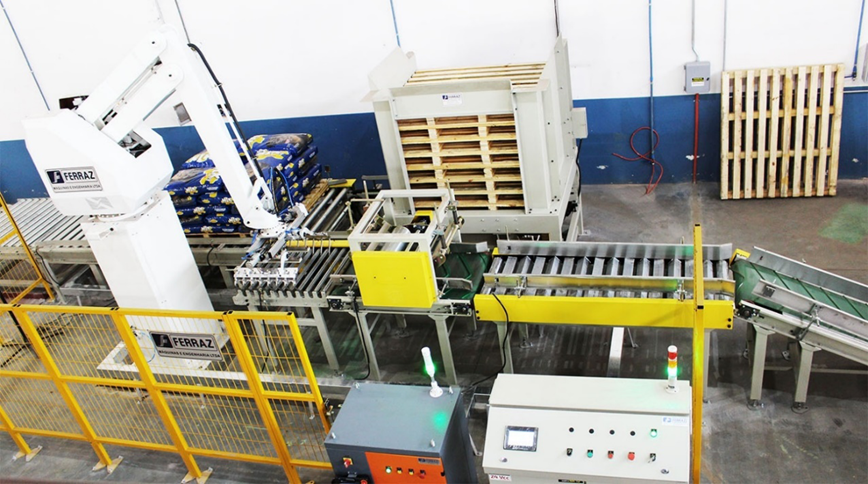 By using load cells in the tank that feeds the extruder's dosing thread, it is possible to know how much flour enters the equipment per period. From these data, and using flowmeters, it is possible to automate process parameters, such as the dosing thread rotation, the cutting system rotation, and the volume of inclusion of water and steam in the preconditioner for each formulation to be extruded.

It is also possible to automatically increase or decrease the flour volume entering the preconditioner, based on the amperage of the main engine of the extruder. That is to say, if the amperage measurement shows that the motor is working near the limit, the software automation automatically decreases the rotation of the dosing thread.

Similarly, alerts can be issued if, for example, there is a lack of flour in the agitator tank or the steam entering the preconditioner is under pressure.

Finally, the measurement in real time of the food density after the extruder is out; thus, the level of water activity of the food after passing through the dryer can also be performed.

The main automation features currently existing for the pelletizing process are automatic lubrication systems for rollers, adjustment systems for the distance between the roller cover and the die, and the function of increasing or decreasing the thread rotation. The feeder supplies the pelletizer according to the amperage of the principal motor. These features primarily aim at reducing equipment downtime for process adjustments and maintenance.

Taking as example batch coating system of oil, palatants, or molasses, we can install load cells in the lung silo or in the coating itself, in order to know in an accurate way the exact volume of feed to be coated in a specific batch.

With this information, and using load cells or flow meters to control the liquids to be added, it is possible to stipulate the exact percentage of each liquid to be dosed and their time and sequence application. That is, which liquid will be applied first and which one later. This happens in addition to registering the formulas used, already with the process parameters of each product.

In addition, there are semi-automatic and automatic bags. Semi-automatic bag lifts dose and weigh the products, but they require the operator to open and place the bag in the bagger. Automatic baggers already have a Cartesian suction cup system or robotic arms that open and position the bags in the correct form, which eliminates the need for human labor in the process.

There are Cartesian or robotic systems to automate the function of positioning the bags and forming the pallets according to the previously stipulated layout. In addition to providing labor cost savings, these systems can also ensure that the pallets will actually be assembled according to the previously stipulated design, i.e. number of bags per layer, number of layers, correct positioning of each bag, etc.